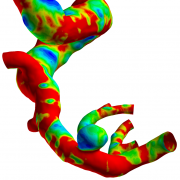 A cerebral aneurysm is a sack-like bulge of the vascular wall of a brain artery. According to the German Stroke Foundation (DSG), about 1.5 million people in Germany live with a brain aneurysm. In most people, the aneurysm remains undetected for the rest of their lives. Aneurysms can remain completely inconspicuous, but can also cause life-threatening bleeding in the brain (subarachnoid hemorrhage, a special form of stroke).

Even their treatment is not without risk. Here there are two common procedures in which the aneurysm is closed: Neurosurgical, during a small cranial opening using a clamp (“clipping”) or neuroradiological, by advancing a metal spiral using a microcatheter over the inguinal artery to the aneurysm (“coiling”).

It is known that on thin-walled (“vulnerable”) aneurysm regions there is an increased risk of rupture. The correlation between vessel wall thickness and the flow properties of the blood flow is the subject of intensive medical research and empirically proven.

CFD flow simulations can be used to display flow parameters such as wall shear stresses. With the help of this informations and the formation of scores, conclusions can be drawn about thin-walled areas of the aneurysm with an increased risk of rupture.

Currently, the team of the CFD Consultants GmbH, together with the with partners from industry and academia, is involved in a research project to develop a CFD-based method for the detection of cerebral vulnerable aneurysm regions.

The aim of the research project is to develop an independent program with a fully automated workflow whose application in aneurysm treatment will become part of clinical routine and can be used in emergency medicine.

Dr. Volker Kassera appointed to the NAFEMS CFD Advisory Board